Someday I will rest, but for now, I am a Black Father
By Marlon Fisher

Dad Guild board member, Marlon Fisher, with his two children.
For hundreds of years, black men have been trying to figure out how to stay alive in this country. Black mothers and fathers have struggled for generations in the knowledge that even if their children are alive and well, they can never truly be safe.

I was born into this knowledge. Most black babies are, especially those who, like myself, are raised with ongoing, consistent community violence around them. From an early age I understood the connection between privilege and safety, between privilege and power. I understood it in every cell of my being. I lived day in, day out in a world where my mother, my brother and I were considered “less than” by the country we called home, where my safety was never assured.

When I was six years old, a group of well-intended, wealthy white people offered me privilege, status and wealth in the form of a college scholarship. Even with a six-year old’s mind, I knew this opportunity was my way out, and it began a lifelong strategy of staying alive by amassing as much privilege as possible, as quickly as possible. I sought to grab it whenever it was given to me by white people, and to scrape it together wherever there was an opportunity to get it on my own.

As a young man, I went into the military, which afforded me all manner of privilege. I was able to get an education, and I am able to receive physical and mental healthcare. But in addition, being a vet has created a greater likelihood that white people will be at ease around me. When I get pulled over and I hand the white officer my driver’s license with my veteran status, I am protected. When I meet a white person and mention I was in the military, they are far less likely to assume I am a criminal, dangerous, previously jailed, or mentally ill. They feel “safer” because, they reason, I served in the Army to protect their rights. (The irony is that my military service traumatized me and exacerbated my mental illness.)

When I moved back to the U.S., I built upon the privilege afforded by my military service, obtaining a job for the State of Vermont at the Department for Children and Families. More privilege came when I married a white woman with some means, and we were able to buy a house in the suburbs. I joined the board of the Beach Club in our neighborhood and other community boards. I began working for the Department of Corrections and received a badge. I now carry this badge of literal and figurative privilege everywhere I go.

I also make friends with as many police officers as possible. I do this because I want them to know my face and my name—so they’ll see me as a human being instead of just a profile. I do this so when a police officer comes after me, there is a higher likelihood I will be recognized and my life will be spared. I also chose a job working side by side with five different police agencies responding to mental health crisis. I earned their trust by showing up for them every single day to take crisis off their hands and moving smoothly through chaotic situations caused by trauma, oppression, pain, substance use, and mental health issues. They knew I would stand up for them and that made me and my family safer.

I have done all this “stockpiling privilege” because if I hadn’t, the statistics say I would be dead or in jail by now. I began doing this early in life so I could survive. I continue to do it now so hopefully one day my children can survive and be safe. This gathering of privilege has come at a substantial cost to me and my integrity. I had to accept the possibility of a legacy of early death or jail or swallow my pride and manipulate a system to scratch together as much safety as possible. I traded some mental health for a license that says I am a Veteran. I did want to serve the country but mostly I wanted a level playing field. I bartered protection by the police for not being able to spend nearly enough time with people of color. These privileges came at a cost to me because I was trying to stack a deck evenly that has been inequitable for generations before me. When White folks chained my people to the inside of a boat and forced them across the ocean, bought and sold them, took everything good from them, raped them and coerced them to do hard labor, and no one has leveled it since, that is when my privilege got decided. Unless, I took matters into my own hands.

Make no mistake: none of this privilege gathering guarantees my safety. Sometimes the privilege I have managed to collect is not immediately visible to a white person—or they willfully ignore it—and in those cases, I am any other black man. They clutch their purses, sneer, stare, verbally insult me and my family. I have been profiled by police; I have been accused of crimes I didn’t commit; I have been the victim of constant racial harassment by white Vermonters. I have been asked over and over again where I come from and when I will be leaving. I have been on the receiving end of microaggressions about my hair, my skin, my shape, my size, my penis, my love, my work, my family and my life. I have been followed, demeaned, excluded, shamed, threatened and made to feel uncomfortable just because I’m daring to take up space in a world built to advantage white people.

To keep my boys safe, I teach them that other black people are their friends. I also teach them that police are their friends, even though this is not always true, and I know when they are older, we may have to have a much different conversation about the police. There are police officers that even though I started out befriending to ensure my safety, I now consider real and true forever friends. They check on me and my family and show us love and care. I hope that someday I do not need to work so hard to show the police my vulnerabilities and my sons to keep myself and them alive. For now, I want police officers to see my sons’ smiles, their faces, their humanity – in order to circumvent the societal brainwashing they receive that kids who look like mine are automatically the enemy. I suppose I’m passing the privilege of “being friends with the police so they don’t kill you” along to my kids at an early age.

As I look around at my black and brown brothers and sisters who have been falsely accused, who have been profiled, who are being arrested, sentenced, incarcerated and killed at greater rates, I am heartbroken. The system is built to benefit white communities that disproportionately disadvantages, imprisons and kills members of my community. Because of the privilege I have been given (and gathered for myself), and because of a little bit of dumb luck, I have managed to survive thus far.

I’ve tried to pay that advantage forward; I’m out there trying to help black and brown kids every day—not just my own—by sharing my strategy of “stockpiling privilege.” I teach them the secret tools that will mitigate their personal risk and keep them safer in a society that is built to suspect and suppress them. But I know it is not enough. For these kids to be truly safe, the system must change. And it won’t change unless white people participate in the dismantling of a system built expressly for them.

White folks, when you are silent and inactive, you perpetuate this system – one that has been designed to disadvantage, imprison and kill my babies. As I struggle to build a fortress around these two beautiful children of mine, your unwillingness to act tears that fortress down, brick by brick, endangering their lives.

So please: I ask you to share your privilege liberally with those who need it. Share your power. However uncomfortable it may be, whatever you risk by doing so, whatever sacrifice it may cost, it is only a fraction of what people of color have felt every minute, every day of our lives.

As long a racist system is kept in place by the fear and unwillingness of privileged white people to act or concede any amount of power, we will never dismantle it, never have true equality. Though in my lifetime I may never be permitted to feel equal in our society’s values, or know that I am truly safe from harm, I want these things for my children, and for the children of all my black and brown brothers and sisters. I believe that this response will last only as long as White communities continue to center these issues. Sadly for my people, White communities have moved on as soon as they returned to their privilege, which for some will be immediate. I will continue to stand up, my wife continues to stand up, the people in my inner and trusted circle continue to stand up. I continue to share privilege and power and will teach my children as they grow. Whether they live or die, whether I live or die, whether my family survives, we will be true to justice and equity whether you come with us or not.

At the beginning of each month (or shortly after, cause you know...kids) Dad Guild releases a calendar and newsletter. Read the latest to see what we're up to! Please click the image below to read our latest newsletter. 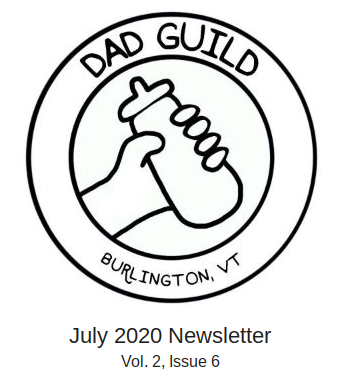 In addition to the monthly calendar you can find on our events page, you can also subscribe to the Dad Guild Google Calendar. This way, you can add it to your current Google calendars and set reminders, meaning you'll never miss an event again. Hot dog! Subscribe to the calendar here: calendar.google.com/calendar/b/1?cid=aW5mb0BkYWRndWlsZC5vcmc
​

During the month of June, pick up a copy of the Kids VT newspaper to learn a bit more about Dad Guild. You should feel free to cut out pictures and put them on your refrigerator. Or, if you prefer the digital version, access the article here. 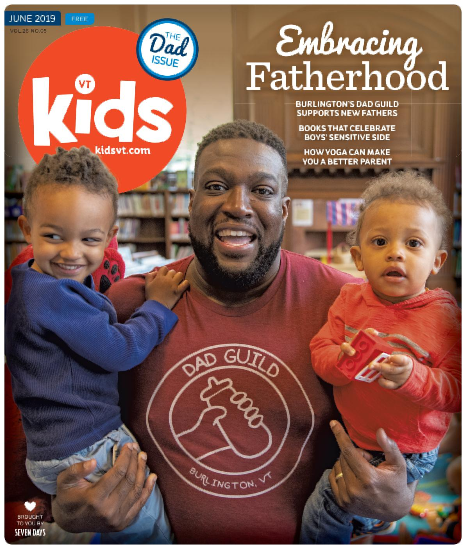